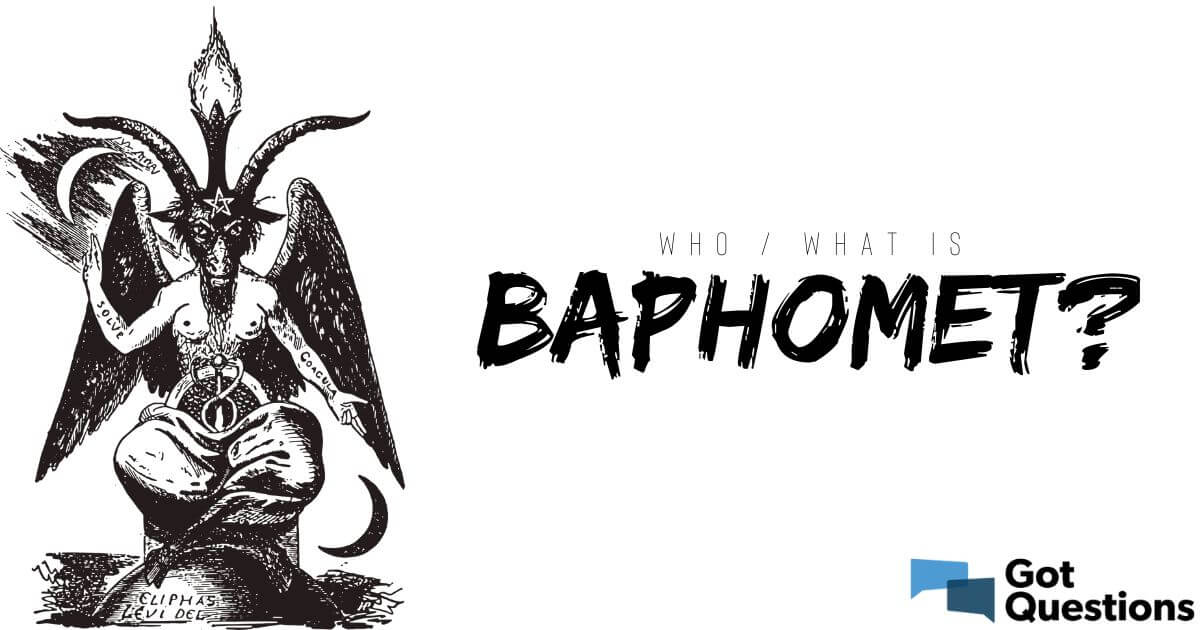 Baphomet is the name of a false god associated in times past with the Knights Templar and today with Satanism and the occult. Modern representations of Baphomet picture it with a goat’s head on a human body (with both male and female traits); between the goat’s horns is a torch, and the image often includes a pentagram. The origin of Baphomet-worship is subject to much debate. Even the origins of the word Baphomet are unknown. Some believe it is a French corruption of Mahomet (“Muhammad”). Others believe it to be a code from Kabbalah meaning “the father of the temple of peace of all men.” Or the Arabic word for “the father of understanding.” Or, finally, the Jewish Atbash cipher as applied to Sophia—the Greek goddess of wisdom.

However its name came to be, Baphomet apparently arrived in Europe with the Knights Templar upon their return to France from the Crusades. In the early 1300s, the Inquisitors of King Philip IV accused the Knights of discovering and worshiping the foreign god Baphomet during the war. Some Knights did confess, but only under torture, and the convicted gave different accounts of the idol’s form: it had one face, it had three faces, it was just a human skull, it looked like a cat. Worshiping an image of an animal or man presumed to be Muhammad is inconsistent with Islam, but it would match the misinformed beliefs about Islam found in France at the time. In addition, there is no mention of Baphomet in Templar literature. Attempts have also been made to link Baphomet to Free Masonry, but these accusations are either inconclusive or complete fabrications.

The modern representation of Baphomet originated in 1861 with the French occultist Eliphas Levi, who drew an image of the “Sabbatic Goat or Baphomet of Mendes” in his book Dogme et Rituel de la Haute Magie (Dogmas and Rituals of High Magic). Levi’s image is a hermaphroditic figure, sitting cross-legged, with the head of a goat. The figure contains several opposites: one male arm and one female, women’s breasts but a Caduceus phallic symbol, one arm pointed up at a white moon and the other pointed down at a dark moon. The contrasts were to symbolize conflicting forces in the universe that must be balanced to make true light. Levi meant to combine several icons: the Templar figure; Satan; the fertility god-goat of Mendes, Egypt; and the goat that witches supposedly worship at their Sabbats, or pagan holidays. The goat-like appearance of Baphomet also resembles Pan, Puck, and the Celtic Cernunnos. Levi claimed the name Baphomet came from reading the Latin abbreviation for “the father of the temple of universal peace among men” backwards.

In 1897 Stanislas de Gauaita adapted the head of Levi’s Sabbatic Goat to fit inside a pentagram. De Gauaita’s version of Baphomet included an upside-down, five-pointed star surrounded by two circles. Between the circles are five Hebrew letters, one on each point of the star, spelling the Hebrew word for “Leviathan.” Around the arms of the star on the top is the name Samael, the angel of death in Talmudic lore; and on the bottom, Lilith, a female demon who was Adam’s first wife according to pagan beliefs. In 1969 Anton LaVey adopted the pentagram goat for his Church of Satan and definitively identified it with Baphomet.

Aleister Crowley, the occultist and magician of the late 19th to mid-20th century, interpreted Baphomet as the “divine androgyne.” Crowley rejected the concepts of the biblical God and Satan and followed the Gnostic teaching that Satan brought wisdom to mankind—that old lie of the serpent in the garden. Baphomet was his symbol and represented life, love, and light. With the addition of the Zodiac sign Capricorn (the goat), liberty is added.

The myth of Baphomet has grown over the last few centuries via occult symbolism and numerology. Christians should obviously avoid the use of Baphomet; the ideas it represents are patently unbiblical. It is the Lord God alone who gives wisdom (Proverbs 2:6), and to seek for wisdom or enlightenment from a source other than God is to be led astray: “The idols speak deceitfully, diviners see visions that lie; they tell dreams that are false” (Zechariah 10:2). We should have nothing to do with Baphomet or other blatantly occult icons. As Joshua told the Israelites who were inheriting the land of Canaan, “Do not associate with these nations that remain among you; do not invoke the names of their gods or swear by them. You must not serve them or bow down to them” (Joshua 23:7).