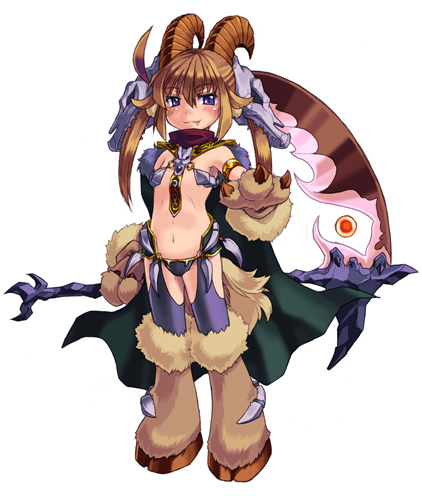 Baphomets are among the most powerful of monster girls, said to be both physically the strongest, and have the “most amazing vagina of all monsters“. The diminutive goat-girls were entrusted long ago by the Demon Lord to serve as generals of the Demon Army. They were also put in charge of the Spell Casting Unit, and in this capacity baphomets and their witch subordinates perform the bulk of the magical research and development in Royal Makai, cooking up such lewd techniques as pleasure runes and doppelganger medicine. The baphomets kind of overstepped their bounds in this regard and “ran it according to her own whims” [1], leading to the establishment of the Sabbath religion: a loli-supremacist cult which has become perhaps the largest monster proselytizing organization in the Monster Girl Encyclopedia world.

Each Sabbath branch office is said to be headed by an individual baphomet. There are several of these monsters mentioned in detail within the translated materials: most importantly the head Baphomet and overlord of the Sabbath, who collaborated with Wandering Scholar on the “Monster’s Sorcery” section of Monster Girl Encyclopedia I.

As baphomets are so powerful, they are mentioned in the section on lilim monsterization as monstergirls which cannot be created through monsterization except in very special circumstances. Baphomet’s powers do have limits, though; despite their best efforts, all attempts to create a loli holstaur are defeated by the cow-girls’ oppai [2].

Dark beasts, possessing tremendous power, that lurk in Demon realms. Their outward appearance is that of a little girl, but out of all the monsters, they possess the most physical power. They are a race that serves as the leaders of the Pagan cult known as the “Sabbath,” commanding a countless number of witches. Also, it is said that one of them is the supreme leader of the Demon Lord’s army, they are feared by humans and monsters alike. 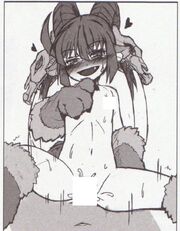 Baphomets are known to have the most amazing vagina of all monsters. Even a man who fancies adult women will totally fall as a lolicon after getting one taste of them.

The “Sabbath” they lead has the following creeds: “know the depravity and charm of little girls” and “give in to pleasure like a monster.” In order to spread this doctrine and increase the number of adherents, they tempt women with promises of “great magic power” and “eternal youth.” If seduced by the temptation, a woman’s body will then be thoroughly inculcated in devilish pleasure at the hands of her and the witches. By being granted a portion of a baphomet’s demonic energy, they are changed into witches, the servants of the baphomet.

Other races of monsters who join the faith, have their bodies changed into those of little girls through the Baphomet’s power as well, after that they will never grow any older. Also, periodically, their subordinates, the Witches and their familiars[3], will have a “Black Mass,” where they have a feast of pleasure to reconfirm the Sabbath’s doctrine.

Most of them live in Demon Realms, so they are hardly ever seen in human realms, but on rare occasions, they are also seen at places outside Demon Realms. If you ever meet one of them, never assume that you can defeat her. With average abilities, one would be hopelessly outmatched; any attack would backfire, it would only lead to being violated and getting baptised into the Sabbath.

Their bodies are tiny, like those of children according to the doctrine of sabbath, but they’re packed full of the childish charm they espouse. With their body and technique, they’re capable of pleasing men even more than a succubus can. They are especially known for having the most amazing vagina out of all monsters. Once a man has joined with one of them, the strong sucking and tight squeezing will make him feel like his own body has become one with hers and he’ll sink into the sensation of having everything sucked out by her.

Because they also seek superior men as their husbands in the same way as other upper rank monsters, most men they catch will be released, but many of the men assaulted by them will come to adore the Baphomets and they will run off someplace with her and the Witches and disappear.

In most cases, Baphomets will accept a man as their husband if they have enough power to defeat them. It is said that they seek “an ideally strong and gentle big brother who is reliable and will shower them with love and attention,” but the truth is uncertain.

TL Note: There is a word in Japanese with no english equivalent, “meiki” which is a term for an exceptional vagina. What is says is that baphomet’s vagina is the “best meiki” of all monsters.[4]

Are there any oppai-loli Baphomet?

I think there are. But I think they’d be incredibly rare and regarded as heresy by the Sabbath. [5]