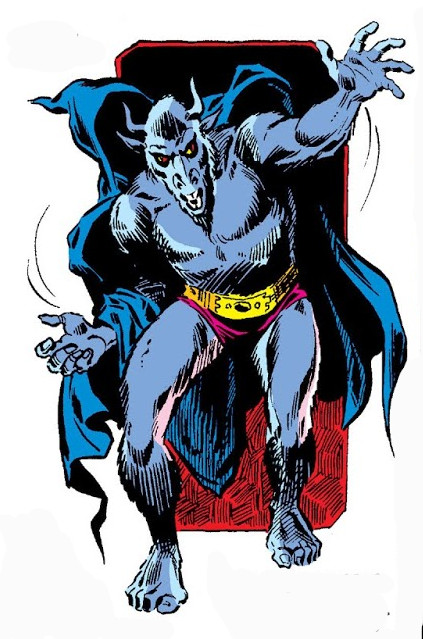 Daimon Hellstrom was asked by Katherine Reynolds to investigate a satanic cult which had been known to be operating around Gateway University. The day was actually Hellstrom’s birthday, February 2nd, an important holiday in a satanic calendar known as Candlemas, and so he suspected that the group would be participating in a satanic ritual that night. The gathering, in fact, turned out to be a trap set by Hellstrom’s father Satan and the leader took off his robe to reveal himself as Baphomet, one of Satan’s most powerful servants. After a short skirmish, the rest of the group was transformed into a horde of demons as well. The Son of Satan was forced to retreat, in the hopes that Satan would not wish to reveal the presence of his minions in sight of the public. Satan was so incensed at his son’s perceived betrayal, however, that Baphomet, carried by flying demons, followed Hellstrom to the top of the St. Louis Arch. After incinerating the flying demons, Hellstrom succeeded in blowing out a piece of the Arch from under Baphomet’s feet, causing him to hurtle to his destruction far below, causing his spirit to be returned to Hell.[1]

When summoning Mephisto, Doom invoked Baphomet’s name along with Beelzebub’s, Satan’s and Thog’s.[2]

Somewhat skilled with a long-sword

Has wielded a longsword on at least one occasion.